Explore the beauty the ocean has to offer

Susan Copelas has been a pioneer in women’s diving, youth outreach and environmental protection throughout her 40 years of diving. By founding her own independent scuba instruction business, she has introduced and educated over 1,700 of tomorrow’s leaders in the sport of scuba diving. She has also pushed the boundaries of diving, becoming the first female scuba diver in previously-uncharted waters as part of the first expedition retracing Sir Earnest Shackleton’s 1914 trip to the Antarctic in 2005. Not content with merely observing, she’s partnered with numerous global organizations to lead underwater fish surveys, reef reconstruction,  and environmental advocacy efforts. She continues to actively work on creating innovative kids scuba programming, publish articles on diving, and volunteers with non-profits to rebuild coastal  communities hard hit by natural disasters.
Youth Educator

Recognizing the unique synergy of scuba diving and scouting, Susan has worked with Boy Scout and Girl Scout troops to integrate scuba diving, undersea exploration and environmental conservation into the educational and growth opportunities offered through scouting.  She is Coordinator and Program developer an extensive program with the Girl Scouts Council of Eastern Massachusetts, Sea Scouts and local Boy Scout troops, totaling over 800 scouts in the past 7 years.

Susan is just as passionate about pushing the boundaries of women’s diving as she is about teaching the Next Generation of divers. Throughout her long career, she has created opportunities to go where no woman has gone before, sometimes literally. In 2005, she joined photographers from National Geographic and film crews from around the world to take part in a historic retracing of Sir Earnest Shackleton’s incredible 1914 voyage to Antarctica. Always first in the water, Susan and her team explored undersea waterscapes, icebergs, caverns and rock formations that had never been seen, charted, explored or photographed ever before. As the first female diver in these virgin waters, she was able to show her team, and the world, that there is no place a woman can’t dive. Several articles about the expedition have appeared in national publications earning her a membership to The Explorers Club, an elite organization set aside for those who have made significant contributions to the field of exploration/science.

Not content with just making history once, Susan was asked by the Maritime Gloucester  in Gloucester, MA to be “the”safety diver for their documentary on 100 years of hard-hat diving. As part of their historic filming series, Susan designed, oversaw and implemented the safety procedures, ensuring that modern safety standards were followed in an activity, hard-hat diving, which was originally quite dangerous. To be the first female safety diver responsible for the protection of Mark V hard-hat divers in an epic recreation of an activity that was once exclusively male was a powerful demonstration of the progress that women have made, and continue to make, in the world of scuba diving.

Susan has also dedicated herself to protecting the underwater environment.  Locally, she’s worked hands-on with the EPA to protect and study eelgrass ecosystems among coastal construction zones and REEF.org (Reef Environmental Education Foundation) to lead teams of divers in fish counts and other marine protection activities. Globally, she has helped repair damaged coral beds as part of the Elkhorn Coral Restoration Project in Saba damaged by Tropical Storm Erika, and participated in the Global Explorers Live Broadcast from the Caribbean (Dominica), a kids program where local children learn about and interact with undersea life through hands-on experiences, webcast globally to schools and other youth programs all the way up to New England. Passionate about community-based conservation, she traveled to Malapascua, Philippines in 2014 after Typhoon Haiyan to assist in reef and beach clean-up and as well as humanitarian relief, and to Belize in 2010 after Hurricane Alex to asses and repair damage to reefs and underwater archeological sites.

Additionally, as the Director of the Worldwide Christian Scuba Divers Association, Susan has led fundraising, outreach, awareness and conservation efforts and events on the behalf of marine ecosystems worldwide. 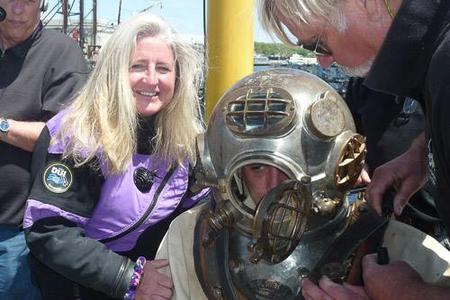